The modified activated sludge Wastewater Treatment Plant became operational in 1966. Wastewater is effectively treated before it is delivered to the Little Nemaha River.

The first Wastewater Treatment Plant was built in 1966 with federal grant funding at a cost of $160,000.00. During the years of service, the plant suffered damage from several floods. In 2001 the plant site was elevated to the 500-year floodplain. During the latter years of operation, the original plant ammonia levels in the discharge and sludge process were marginal in meeting current permit requirements and would not meet requirements stated in a new discharge permit which is set by Federal and State Regulations. This began the planning for a new treatment plant.

In 2010, a new Wastewater Treatment Plant was built to meet the treatment capacity of the community, new discharge treatment requirements and to allow for future growth and development. 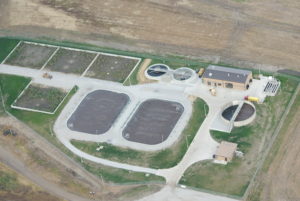 The new Wastewater Treatment Plant consists of two aeration basins, a bio-solid pre-treatment storage tank, headworks building, disinfection basins, two final clarifiers, four reed beds (to eliminate land applying sludge) and the control building. This plant allows us to have the ability to take an aeration basin or final clarifier out of service in the event of an equipment failure or maintenance. The plant has more than doubled the capacity of the original plant and will discharge water that exceeds the discharge permit requirement to the Nemaha River. As part of the treatment plant project, new sewer line was installed from the Wastewater Treatment Plant to 6th and N Streets then south to 14th & Q Streets.

This section of the sewer line was overloaded and in poor condition. This allowed groundwater to infiltrate several sections of line, which overloaded the old plant in heavy rain events, which increased treatment costs.

The new sewer line allows for increases in capacity and for new growth and development from the west edge of the community. The new sewer line was also routed to serve existing houses that were on septic tank systems, so they can now hook up to city sewer and the septic systems can be removed. Currently, the BPW maintains over 28 miles of sewer lines.